Magic - A History of Queen 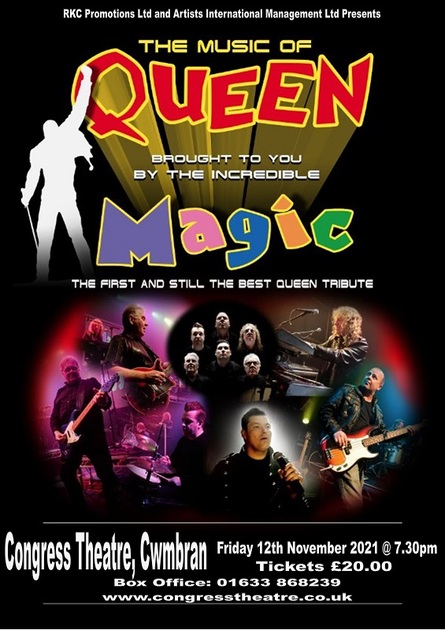 Magic a kind of Queen

MAGIC, the first and still the best tribute to Queen, perform all of Queen’s greatest hits plus some you may not have heard for a while, in their latest show for 2017.

It’s refreshing that in these days of pre-recorded backing tracks, Magic perform completely live. With five vocals to back up the powerful lead vocal of the dynamic Roger Brown, Magic can recreate all the complex harmonies that are Queen’s trademark recording sound. This, along with two guitars, bass, drums and the brilliant piano and keyboard skills of Dave Chapman, produces a sound that is second to none. While not attempting to emulate Queen visually, Magic creates all the excitement of a Queen live show - not to be missed.

FROM GORKY PARK TO THE PALLADIUM

Magic are no strangers to the big stage. They headlined a concert in Gorky Park, Moscow (by request of the Russian government) and have played venues in Hong Kong, America, the Middle East and throughout Europe. Closer to home they’ve performed theirMagic a kind of Queenshow, twice, at the world famous London Palladium and in countless other theatres and concert halls throughout Britain. All in all, a background that’s given them, experience to deliver a world class show to remember.

A Kind of Magic