One Vision - a Tribute to We Will Rock You 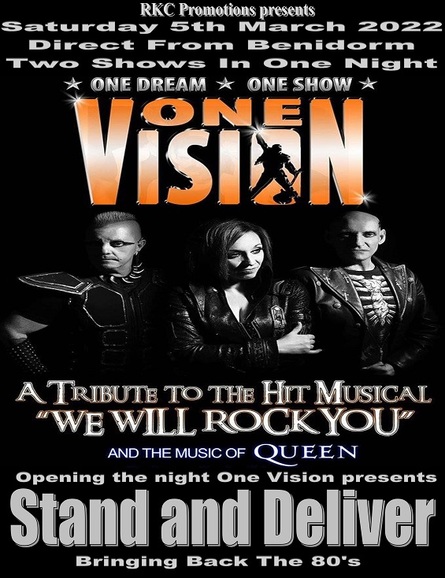 After a brilliant night at The Congress in 2019, One Vision return with their award-winning tribute to the hit West End musical We Will Rock You and the music of Queen.

The show consists of Mark Harty, Joanne Crowle and David Wenzel all very successful singers from the UK now based in Benidorm.

Mark originally from South Wales started in showbiz at the age of 11 as part of a family act The Harty Family then teaming up with David Wenzel to form a very successful duo called Smart Move.

David Wenzel from London was part of a band who toured Australia & Asia before he met Mark, who both went on as Smart Move to top the bill at Blackpool’s famous Layton Institute Club, then going on to perform corporate work all over the UK as well as on 5 star cruise ships worldwide.

Travelling the world for many years before they settled in Spain,

Seven years ago they put the show One Vision together & have gained so many fans the show has gone from strength to strength.

Joanne Crowle from Wigan has also come from a long line of entertainers.

She has worked all over the UK & abroad from holiday centres to the army bases, the blend of the three voices & harmonies are second to none.

Voted the number one tribute show in Benidorm for the last four years.

If you enjoy the music of Queen and loved the great sounds of the 80’s then this is a show not to be missed.